Genealogists who research Catholic Poles soon realize the importance of sacramental records of the Catholic church. Often they are the only records which exist on our ancestors, Generally speaking, the early church records are more reliable than civil records. For those with ties to Bremond, St. Mary Catholic church is of prime importance.

In 1875 Jozef Bartula and his family as well as Frank Bainski came to Bremond to work as tenant farmers for John C. Roberts. There was no Catholic church. However, a priest was coming from the church of St. Mary of the Assumption, Waco TX to minister to the Catholics in Bremond. Jozef tells us that Father Biusant (?) came four times a year for services which were held in the home of John and Mary Louisa Roberts.

The records of Waco indicate that Rev. J. L. Bussant came to Bremond as early as January 1872. In February 1876 he baptized Jozef and Catherine Bartula's son, Joseph, with Mary Louisa Roberts as godmother. Other priests stationed in Waco at the time who also may have come to Bremond were J. Choland and E. Fleury.

In his book of baptisms, marriages, and deaths, Rev. Joseph Mosiewicz records that he was serving Brenham beginning 15 July 1876, and in Marlin and Bremond beginning 1 June 1877. Bartula tells us that in 1877 Father Mosiewicz, "heart and soul a Pole," came to Marlin; he held services in Bremond every second Sunday.

The first child baptized by Father Mosiewicz was Catharina Gorski. She was the daughter of Ignatius Gorski and Rosalia Olszewska. Born on 9 Jun 1877, she was baptized 10 Jun 1877. {quotes}The first marriage Father Mosiewicz officiated was that of Apolinarius Karwowski to Elisabetha Czechowicz on 19 jun 1877. Apolinarius was a nobleman, son of Peter de Karwowski and Carolina de Zylinska;{/quotes} wife Elisabetha was the daughter of Mathai Czechowisz and Catharina Dutkiewicz. Apolinarius was from Russia and his citizenship was granted 25 Nov 1879 in Houston, Harris County (11th Judicial District Court Minutes, Volume R, page 610).

Bartula writes in his diary that in 1878 Father Mosiewicz began to build a church in Bremond. The Polish people collected only $115; they didn’t have the money. John C. Roberts gave $250; the remainder was collected from other people in Robertson County. The first wooden church was built at a cost of $1,200. It was 50 feet long and 25 feet wide. A cross extended from a spire 40 feet above the ground. A bell, hung from a wooden platform near the church, called the people to worship.

Jozef also lists the names of 50 polish families who gave small donations and their time in building the church. John B. Ales, a German Catholic, was the building contractor. Jozef also tells us that the first services was held on the second day after Whitsunday in 1879.

To explain some of the attitudes of the parishioners towards Father Mosiewicz it is good to know some of his background. Father was born in 1831. Recruited by Bishop Claude Dubuis from France where Mosiewicz was living, the latter was ordained in Galveston for the Galveston Diocese on 12 March 1875. When Father Mosiewicz built the church on Bremond he was almost 50 years of age. Father Polujanski was much younger – about 30 years of age. Perhaps some thought Father Mosiewicz was too old. Records in the Texas Catholic Archives chronicle some of these difficulties. On 20 Dec 1880 a letter from Bishop Dubuis to Father Polujanski clearly directs the later to be an assistant to Father Mosiewicz, "submitting in all things to his instructions…"

Father Mosiewicz did not live long; he died of burns received when the church and rectory in Marlin burned in 1883. Father sought assistance from his friend, Rev. Victor Lisicki, in Bryan TX following the fire. Father Mosiewicz was buried in the Bryan City Cemetery on 9 Feb 1883.

Father Polujanski continued as pastor of Bremond until mid-1887. His last record is dated 8 July 1887. Until the end of the year, priests from Brenham TX were traveling to Bremond for services. Records of baptisms and marriages for that period are found in St. Mary Church, Brenham TX.

In January 1888 Rev. Peter Litwora arrived in Bremond. His passage from Poland had been paid by the Bremond parishioners. Father Litwora was ordained in the Diocese of Tarnow from whence came the first Bremond Poles from Austria-Poland. During his pastorate the first church was enlarged by an addition.

Successive pastors of the early years were: Rev. Francis Machan (1904), Rev. Anthony Kirpajtis (1906), and Rev. Ignatius Szymanski (1908). It was Father Szymanski who provided stability for the parish during his 33-year pastorate. My mother told me that she often heard Father Szymanski say from the pulpit that he wanted no one coming to him with gossip. Perhaps it was this alone which stopped problems between the parishioners and the pastors.

Father Kirpajtis has collected over $3,000 toward the building of a new church. Death interrupted his plans which were left to his successor to complete.

Father Szymanski writes that funds were collected by assessing each family according to their means. The minimum was $25; maximum was $200. The parishioners excavated and built the concrete foundation. They also furnished all the sand and hauled all the building materials. Architects for the church were Sanguinet and Staats with Belger & Flume of Austin as contractors.

The brick church was dedicated on 17 Feb 1909 by Bishop N. A. Gallagher. The structure was of gothic style with dimensions 125 feet by 62 feet.

In 1917 Father Szymanski reported to the Bishop that, in addition to other possessions, the church had 17 statues. Many were donated by families, usually of a saint significant to the family. When the church was demolished, some families bought the statues which they had given. 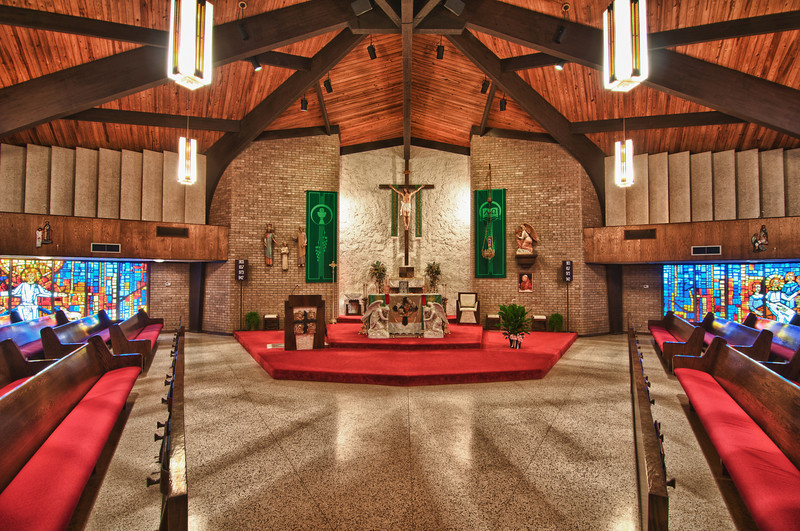 By the time Father Wozniak became pastor dangerous cracks had developed in the church. It was decided that the beautiful church had to be replaced. It was torn down in 1970.

On 13 June 1971 the current church was dedicated. The modern building was erected according to changes of Vatican Council II.

The sanctuary lamp from the second church has a prominent place on the altar of the current church. Also preserved were the bells which had called the people to worship for over 50 years. The cast bronze bells, named St. Ignatius (the larger) and St. Albert and St. Louis were carefully removed, cleaned and re-installed in the new church.

Long before I began to research I wondered about the correct name for the church in Bremond. My mother always told me that the name of the church was Niepokalanego Pocia NMP, translated to Immaculate Conception. My confusion still exists after reviewing papers in the Texas Catholic Archives. The following names appear in the records referenced; all written by Father Szymanski.

For those seeking information on their ancestors who settled in Bremond, it is important to note which early records exist

The records of St. Mary Church, Bremond, have been microfilmed and may be viewed at the Texas Catholic Archives in Austin. It is advisable to call and reserve a microfilm reader before visiting the Archives.

This article originally appeared in the November 1999 Robertson County special edition issue of Polish Footprints, published by the Polish Genealogical Society of Texas .