Polish Fiddle Music, in common with that of England, has had something of a difficult time, and a bad press to boot. Surrounded by its flashy and exotic neighbours in Russia, Hungary and the Balkans, the folk music of Poland, with its major keys, medium tempos, relative lack of ornamentation, and the taste of the "poisoned chalice" of the Bavarian Oompah , all leave Polish folk music looking rather tame. Is there more to Polsh fiddle music than meets the eye?

One young band determined to break the mold of this stuffy image is the Warsaw Village Band. They reach both forwards, incorporating elements of hip-hop and techno, and backwards, using various archaic Polish instruments including a unique Polish fiddle variant, the Suka, played in the band by Sylwia Swiatkowska. 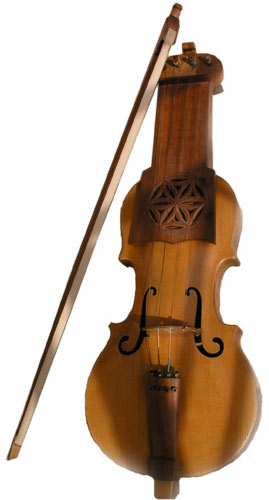 The Suka, like the Gadulka this is played vertically, on the knee or hanging from a strap, and the strings are stopped at the side with the fingernails. The body of the instrument is very similar to the modern violin, but the neck is very wide, and the pegbox is crude. This is thought to be the "missing link" between the upside-down or "knee chordophone" instruments, and the modern violin. It died out, and was known only from drawings of a single specimen displayed at an exhibition in 1888. A century later the instrument was reconstructed by Andrzej Kuczkowski, and is today also being popularised by string specialist Maria Pomianowska.

Along with the bagpipe, the fiddle has always had an essential part in Polish folk music; some of the earliest evidence on Polish bands suggests that they were often a duo, with fiddle leading, and the pipes playing an octave underneath.

Poland as a nation has had a troubled history since it first became a kingdom in 966; through a mixture of poor leadership and aggressive neighbours, the country was partitioned in the 18th century by Russia, Prussia and Austria. Throughout the years up to the close of the first world war, the Polish people were involved in a seemingly eternal struggle to regain nationhood, and the traditional folk music of its people became symbolic both of the lost golden age, and of the hopes for the future.

There are five “National” dances of Poland; the Polonaise, Kujawiak, Mazur, Oberek and Krakowiak.

1.The Krakowiak originates in the region of Krakow, the country’s former capital. It is a fast dance in 2/4 time; a characteristic rhythmic phrase –eighth note-quarter note-eighth note-frequently appears in the melody, and the tune is frequently arranged in repeated two bar phrases. Originally a 2- part form; the Krakowiak, under the influence of “art music” composers, has become more complex, with a contrasting third part with modulating link sections.

The next three dance forms are all superficially similar; they are all in ¾ time, with the strong accent on the second or third beat. They are best differentiated by tempo; the Oberek is fast; the Mazurka is regular, and the Kujawiak is fairly slow. The general mazurka rhythm, common to all three, has a typical phrasing of  two short (either two quavers or a dotted pair) and two long notes.

3.The Mazurka or Mazur is a term which is sometimes used to include the Oberek and Kujawiak as well. It originates from the Mazovia area around Warsaw; men from this region are known as Mazurs. The Mazurka originates at least as early as the 16th Century, and by the 17th had spread throughout the country. In the 18thC the King of Poland and Elector of Saxony, Augustus 2nd introduced the dance into German society, and in 1797 a traditional Mazurka (Dabrowsy Mazurka)was adopted as the country’s national anthem. By 1830  the mazurka was popular throughout Western Europe, where to some extent it symbolized solidarity with the nation’s struggle to regain independence.

4. The Oberek or obertas originates from the central Polish region of  Mazowsze; the name derives from obracec sie-to spin. It is an energetic dance often played at weddings in which couples spin or twirl acrobatically around the room. The accompaniment is typically provided by a kapela or small village band, typically led by the fiddle. Performance by such bands always includes singing; the leader will open a tune with a mocking introduction, telling the band to play but  teasing them for their poverty and lack of accomplishment. The other musicians might join in good-naturedly with the chorus.
The basic melody of an oberek is played repeatedly, but the lead fiddle will show off his skill with complex variations and by driving the tempo faster and faster. It is easy to recognise an oberek by the characteristic rhythm of the four-bar introduction (which usually occurs on every repeat of the tune) and the way every 8-bar phrase ends with an accented 2nd beat of the bar.

5. The Kujawiak comes from the central Polish region of  Kujawy. Like the oberek it is a spinning dance, but more dignified and stately; the movement of the dancers is said to be reminiscent of  tall grain stalks in the field gently swaying in the breeze. Like most of  Poland’s national dances, it has peasant origins, but was adopted by the nobility, undergoing various changes in the process.

The five national dances described above are mostly from the plains area of central Poland, and represent a musical tradition which in its original peasant form has largely died out. There is one region,, however, which largely retains its folk culture, namely the Podhale in the foothills of the Tatra Mountains to the south of the country, the people of which are called the Gorale. This beautiful and remote area has long had a special place in the hearts of Poles as the cradle of Polishness itself, an inspiration to writers, poets and composers alike. Here the music is altogether more wild and unrefined, not having been modified to suit the requirements of the nobility. Indeed this is traditionally the haunt of bandits and outlaws, whose exploits are the source of many legends and songs.

The typical band from this region is a string band with lead violin (prym), several second violins (sekund) -playing lower harmonies or two-string chords, and a three-stringed cello (basy)..

Various eccentricities to the music survive, including the very unusual Lydian mode ( major scale which includes a sharpened fourth- giving three whole-tone intervals in a row; sometimes called the Polish Mode or, in Poland, the Mountaineers’ Scale), and a five-bar melodic structure to tunes such as the ozwodna. This and other tunes from the mountains are in 2/4 rather than the  ¾ more commonly found in the plains.

Dances in the Podhale are often started by the lead dancer, who will sing a line of tune to the band, who will then pick up and continue the melody as the dance proceeds. Singing, either solo or with several male and female voices, is an important part of the band’s performance,and , remarkably, a song will often be superimposed over a completely different instrumental melody. Where an instrumental melody is toaken over by singing of the same melody, there will often be a lurch of tempo (typically the fiddles will be playing faster than the singers want to sing). The Gorale music is simple, emotional, powerful and with a large element of improvisation.

An older recording, of the Karol Stoch band (“Polish Mountain Fiddle music”) shows many of the same characteristics of performance; interweaving vocal and fiddle melodies, aggressive and emotional playing and singing.

The Polka is one of the dances most commonly associated with Poland- ironically, since it neither originates there nor is considered one of the “national dances” The Polka as a dance actually originated in nearby Bohemia (now part of the Czech Republic) around 1830. The tunes first used for the dance were largely Krakowiak dance-songs, and the name Polka derives from the Czech name for a Polish girl. It is a lively couple dance which rapidly gained popularity throughout Europe. More importantly, it has become the standard tune/dance of the Polish community in the US; a quick look through the catalogue of concertinamusic.com (an amazing source of free online Polish sheet music) shows hundreds of Polish Polkas, with relatively few of the tune types described above.

This is perhaps in part because unlike dances such as the Polonaise, for example, the Polka does not have upper-class pretentions; it is a dance/tune very much “for the people”. Polish Music has found a home in the US sitting neatly alongside Old Time music and Texan swing, as demonstrated by Brian Marshall– third generation Polish –Texan, fiddler and bandleader. His band, Brian Marshall and the Tex-Slavic Playboys has a repertoire full of old Polish polkas and waltzes which fit very neatly with the modern Texas down-home sound.

The Waltz is another tune which, although not originating in Poland, has become very much a standard part of the Polish tune repertoire. The Westphalia Waltz, a much- recorded standard of the  American old-time music, began life in Poland some time before 1920 as a song known as “Pytala Sie Pani” or “Wszystkie Rybki”. It was adopted during the Great Depression by downtrodden, overworked and underpaid Polish emigrants in the US as something of an anthem for their homesickness. Recorded in 1946 by the Texan fiddler Cotton Collins who had learned it, oddly enough, in Germany during the war. He named it after the Texas village of Wetphalia, and by that name it rapidly gained national and eventually worldwide fame as a “standard”. Another Polish song with a similar story ended up as the Bob Wills classic "Devilish Mary", and "Maiden’s Prayer" is also of Polish origin.

Chris Haigh is a London-based fiddle player who specialises in Klezmer, gypsy and East European styles. He plays with a trio, Klezmania, doing lots of Jewish weddings and Bar Mitzvahs; this band does a mixture of traditional Klezmer and Israeli tunes along with some jazz improvisation. Tziganarama is Chris's own trio, playing a wide range of Jewish, Russian, Balkan and gypsy music, whilst The Kremlinaires is Chris's wacky 7-piece Soviet Swing band. He first learned East European music whilst playing with Valodya Asriev at Zamoyski, a Polish restaurant in Hampstead. He has a large repertoire of Polish tunes.

Chris sometimes plays solo or as a duo with accordion, going "around the tables" at a dinner.

He writes original klezmer melodies; his tune "Klezmania" was used on a worldwide TV ad for Nike!

Visit Chris at his Fiddling Around The World website