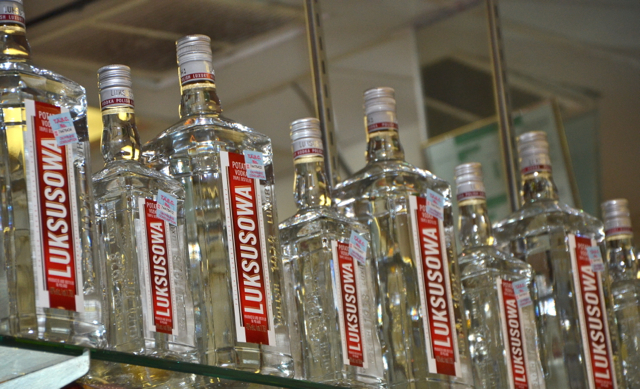 Tropical storm Don did not make it to Houston as predicted very early in the week. The ‘Polish Happy Hour’ was not in jeopardy. On Friday, July 29, 2011 Polonia Restaurant on Blalock in Houston hosted its first ‘Polish Happy Hour’ sponsored by Luksusowa Vodka, a Polish Vodka made from potatoes. Wódka Luksusowa (Polish for Luxury Vodka) is one of the oldest Polish vodkas in continuous production, being first sold in 1928.

Importer Jean-Francois Bonneté (W.J. Deutsch & Sons, Ltd., Senior Vice President – Spirits Division) welcomed an international crowd to this special early evening event. Guests from Poland, Russia, Syria, Jamaica, France, Switzerland, Austria and of course US were spotted in the crowd, and the tables in the restaurant were filled with curious people to experience Polish food and this very special Potato Vodka.

Polonia Restaurant owner Andrzej and Sharon Szpak prepared Polish culinary specialties like Hering in Oil, Hering with Sour Cream, Dumplings, Polish Sausage and Pork Aspic for the Happy Hour which was enjoyed by all.

The highlight of the early evening fun was of course the tasting of the different Luksusowa Vodka libations like Polish Kiss, Warsaw Mule, Lukso Krol, Malinowy Krolwa, Polish Martini or Luksusowa Paradise. Which one did you like best?? Mine was the Malinowy Krolwa, fresh raspberries with Luksusowa Polish Vodka, just simple and delicious.

At the end of the official ‘Polish Happy Hour’ some guests stayed for dinner, and some left with a happy mood and a good memory of Luksusowa Polish Vodka (also available at Spec’s).

Below are a few photos of the fun, all photos by Roswitha Vogler:

Roswitha Vogler is an International Event Photographer from Vienna, Austria, currently residing in Houston, Texas. She earned a MBA form the University of Economics in Vienna and worked for many years in tourism where she traveled extensively throughout the world and shot many events from Helicopter skiing in the Caucasian Mountains, to weddings in different countries like Morocco, Jamaica and Switzerland.

Good photography is truly a matter of the melding of art and science. The art is the vision, being able to see the photograph before you actually take it, the science is to be able to translate that vision into a compelling photograph.

Next time you are planning an event, please email Roswitha or visit Photos by Rovo on the web.