In the tourist area of the Polish Mountains people wear regional costumes on a daily basis.

Podhale is probably the only region in Poland where folk costumes are used commonly. It is partly due to a rich tradition of this region, partly to attract tourists. All horse cabmen wear traditional folk costumes. Here wearing a folk costume help with the business since the business rely mainly on tourists.

Mountaineers are called in Polish górale, are well-known not only for their regional pride but also for their patriotism and even anti-communism. Gorale allegedly saved a life of a Polish king Jan Casimir when he was escaping Swedish deluge invasion in XVII century.

Mountaineers called in Polish górale, are well-known not only for their regional pride but also for their patriotism and even anti-communism. Gorale allegedly saved a life of a Polish king Jan Casimir when he was escaping Swedish deluge invasion in XVII century.

Mountaineers (highlanders) are also great artists, they carve wonderfully in wood. They also sing much better than… a general sample of Poles, even when they are drunk. Just go to one of a beautiful wooden church in mountains on Sunday morning service and listen to them.

Before tourism industry was developed – many regions, especially in the highest mountains were very poor, since the climate here is too harsh for agriculture. Many mountaineers were just shepherds, since sheep were the only animals which survived this climate well. So the percentage of people who decide to emigrate to America was especially high among mountaineers at the turn of XIX and XX centuries. In a long run it helped this region to develop better since people who emigrated abroad were helping their family which remained in the mountains. 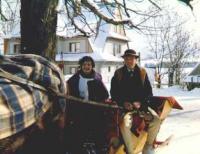 Folk costumes differ from region to region since some of the villages in the mountains were so isolated from the other. For instance there are three distinct regions just in Tatra mountains region ( Tatra is the highest chain of Carpathian Mountains ) – Podhale, Orawa (Orava) and Spisz (Spis). To complicate it even more – some villages, especially in Orawa and Spisz belong to Slovakia and some to Poland.

The most commonly known is a costume from the same as on the picture above but you can see more details. The most popular among tourists parts of the goral' costume are characteristic folk shoes – so called kierpce and a cane called ciupaga. Here is a nice description of Podhale's costume. Look at some other costumes – from Orava or a part of Beskidy Mountains called.

As we already mentioned – mountaineers are very proud of their roots and old traditions. Some last names are characteristic only for certain regions. For instance last names – Bachleda or Gasienica are specific for Zakopane – a biggest town in Podhale region. In order to distinguish different families from the same clans mountaineers were using nicknames which eventually became hyphenated with their last names – Bachleda-Curuś, Bachleda Księdzularz or Gąsienica-Ciaptak.

There were several Polish famous skiers with a last name Bachleda or Gąsienica and everybody know that they come from Zakopane area, no wonder everybody had to learn ski there to survive. Recently a beautiful young lady from a clan Bachleda-Curu became a starlet by playing an important role in Polish national epic.

Jagoda Urban-Klaehn was born in Krakow. Thanks to her parents, the house was always open to people from all over the world. Her parents encouraged her to understand people from different cultures and to learn foreign languages. She has gained a proficiency in Russian, German and English and also knows some French and Spanish. In Krakow, she worked in Physics and also worked on weekends as a tour guide and travel guide.

Jaga moved to Texas to earn a Ph.D. in Physics from Texas Christian University. There she met her husband John, a native Texan, who is also a physicist. They have a 5-year-old daughter, Ela and live and work in Idaho.

Jaga is a writer, editor and webmaster for her Polish Culture website which has hundreds of articles on a wide range of Polish related topics. She also runs the Polish Culture Forum.

In addition to writing and publishing her Polish Culture website, Jaga is a regular columnist for the Polish-American Journal . She is also the editor of the DMOZ directory [Society /Ethnicity /Slavic /Polish] .