The Polish American Council of Texas (PACT) met for their annual Members and Directors meeting and conference in Bremond, Texas at the Texas Slav & German Warehouse on November 23, 2013. Members from Austin, Bryan, Bay City, Bandera, San Antonio, Panna Maria, La Vernia, Gillette and Bremond attended to share news and ideas, learn more about Polish-interest organizations and events across Texas and be inspired to strengthen Polish culture in Texas.
…

On the evening of April 20, 2013, over 400 people gathered in St. Mary’s Recreation Center in Bremond Texas for “An Evening Of Heritage”, an event sponsored by the Bremond Historical Society that celebrated Bremond’s Polish community and the Polish Oral History Project. In February of 2012 the Bremond Historical Society was awarded a grant from the Baylor University Institute of Oral History to record oral histories from the Polish Community.
…

An Evening Of Heritage Banquet In BremondRead More » Chappell Hill Texas derives a lot of history and heritage from its early Polish settlers and since October is Polish American Heritage month in the United States, it was not surprising that the meeting room in the museum was decorated in Polish style for the membership meeting of the Chappell Hill Historical Society on Tuesday, October 25, 2011. There were several display cases containing some of Larry Gurka’s extensive collection of beautiful Polish folk dolls and a lot of framed photos of last years kolędy celebration that was held the day after Christmas.
… Not too long ago, many of the people that were descendants of the early Polish immigrants in Texas spoke Polish but now it is rare to find someone that still speaks the language. In an effort to learn or re-learn the language of their ancestors, a group of people are meeting for Polish lessons every other Tuesday in the old parish hall at St. Stanislaus Catholic Church in Anderson, Texas.
… On Saturday, November 6, 2010, members and guests of the Polish Genealogical Society of Texas met at the Tracy Gee Community Center in Houston for their annual social. Everyone enjoyed fellowship with friends and story telling before eating a delicious meal consisting of ham, barbecue beef and lots of homemade dishes including deserts.
…

Members and guests of the Polish Genealogical Society of Texas met in at the Tracy Gee Community Center in Houston on Saturday, November 7, 2009 for the annual pot luck social and election of officers. Everyone present enjoyed a delicious meal, fellowship with friends and of course, the door prizes. Outgoing president Barbara Lee gave out awards to various members for outstanding contributions to the society over the last year and a new board of directors was elected.
… 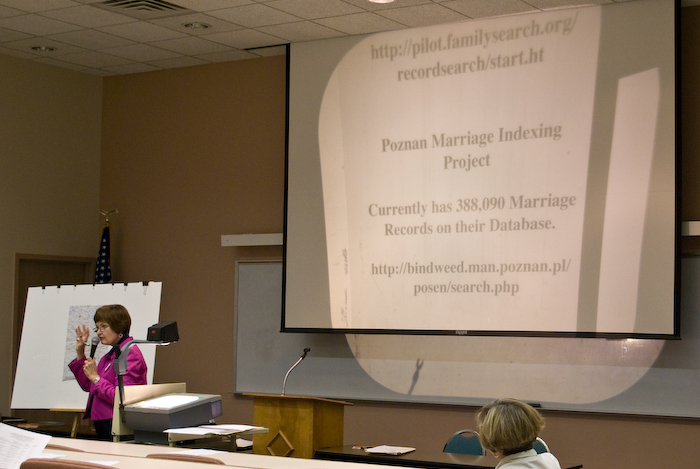 On November 11, 2007, the Polish Genealogy Society of Texas celebrated their 25th anniversary at Wyndehaven Terrace in Houston. The meeting room was beautifully decorated with Polish colors and a large display of Polish dolls and Wycinanki provided by Larry Gurka and Stanley Gorcynski. Teana Sechelski started the program with a presentation on the history of PGST.

Dolores Newman and Michael Kurtin drew the names of the raffle winners and the door prizes. Pete Wessner introduced PGST’s new book, Travel Notes by Stefan Nesterowicz. Monsignor Adam McClosky presented the invocation and Texas fiddler Brian Marshall entertained the guests with his great Polish music. A delicious meal was served and everyone had a great time. More information about the Polish Genealogy Society of Texas can be found on the PGST Website .

25th Anniversary of the Polish Genealogical Society of TexasRead More »