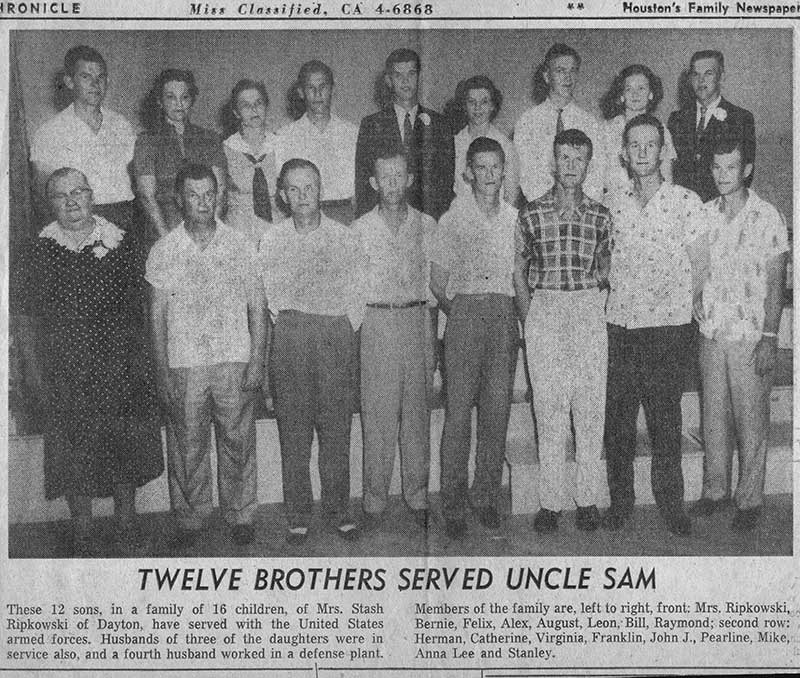 While going through my grandmother Agnes Polka Smock’s old photographs, I found a newspaper clipping from the Houston Chronicle. It was a photo of one of her neighbor’s large family from New Waverly, Texas. The photo was titled "Twelve Brothers Served Uncle Sam" and the caption reads "These 12 sons in a family of 16 children, of Mrs. Stash Ripkowski of Dayton, have served with the United States armed forces. Husbands of three of the daughters were in service also, and a fourth husband worked in a defense plant. Members of the family are, left to right, front; Mrs. Ripkowski, Bernie, Felix, Alex, August, Leon, Bill, Raymond; second row: Herman, Catherine, Virginia, Franklin, John J., Pearline, Mike, Anna Lee and Stanley."

Stash and Mattie Olbrych Ripkowski were 1st generation Americans, children of two of the very early Polish immigrant families that settled in New Waverly. Large families were not unusual in these Polish farming communities and because of demographics and patriotism, a high percentage of the armed forces came from the Southern and Eastern European immigrant families that came to this country in the late 19th and early part of the 20th century. Over a million people in the armed forces during World War II could claim their heritage as Polish- American, and because large families were common, having five or six in the military was not unusual. However, the record for our country when it comes to family members in the service is held by the family of Stash and Mattie Ripkowski. Of the twelve brothers who served in the military, nine of them served in the Second World War and all twelve survived their service tours of duty.

The following article from the Polish American Journal’s website that was originally published in the American Legion Magazine tells the story of the Ripkowski families service to their country. The article was written sometime in the late ’80’s.

Beginning with World War II, Mattie and Stash Ripkowski watched their 12 sons leave home to join the Armed Forces. This patriotic exodus spanned two wars and more than a decade. One by one, the brothers—Bernie, Felix, Alex, August, Leon, Bill, Herman, Franklin, John, Mike, Stanley and Raymond—raised their hands and promised to defend this nation against all enemies.

"To my knowledge, there has never been another family with that many sons from the same parents join the service," said Lt. Cmdr. Ken Satterfield, a Pentagon spokesman.

Unlike the Sullivans, who tragically died when their ship was torpedoed in the Pacific during World War II, the Ripkowskis somehow managed to survive the wars. Today, 11 brothers live near the 200-acre farm their parents worked as sharecroppers during the Great Depression in Dayton, Texas.

Of the 12 brothers, only Raymond is dead and another brother’s peacetime service does not qualify him to be a member of the Legion. The remaining 10 brothers are active Legionnaires and most, at one time or another, have held Post-level offices.

Their service records read something like a history of the military. Felix fought in Africa, Italy, Sicily and France. August served aboard the USS Reno in the Pacific. Raymond’s plane crashed in New Guinea after a bombing run, but he somehow managed to survive. Bernie was in the Aleutians and Alaska with the Army. Alex served in the Army in Europe and Leon’s Army tour took him from Africa to England. Bill island-hopped across the Pacific with the Army and Herman was in the Army in Germany. Franklin started out with the Merchant Marine, then joined the Army. James was part of the Army’s German occupation and Mike was on Okinawa with the Air Force. Stanley served in the Army, then in the Guard.

The Ripkowskis time of service includes World War II through the Korean War.

Altogether, there were 16 Ripkowski kids—12 brothers and four sisters. According to Bernie, Stash Ripkowski was a tough, hard-working Polish immigrant who instilled the same sense of responsibility and duty in his children that he and his wife, Mattie, possessed, enabling them to earn a living from the soil and support their family. According to one of the Ripkowski sisters, Mattie Ripkowski took time each day to write to at least one of her sons.

The Ripkowski brothers were honored by the Dayton community for their sacrifice and service to their country. One of the speakers was Rep. Charles Wilson of Texas. He spoke of values, like the ones possessed by the Ripkowski family. "From the time we were little children," he said, "we were told the truth. Not only have we’ve taught the right values, but through 45 years of peace, we have been willing and able to pay the price. None of this would have been possible without the Ripkowskis and others like them. They were always willing to answer the call. When the trumpet sounded, they were the first to answer." Wilson has entered the Ripkowski brothers’ story into the Congressional Record.

"To this day," said Frank Ripkowski, speaking for his brothers, "it makes us feel proud to be Americans when we see the beautiful Stars and Stripes fluttering in the breeze."

Each brother, and Raymond’s widow, Freda, received a copy of the Congressional Record and a flag that had flown over the Capitol from Congressman Wilson as a tribute to the Ripkowski family’s service to the country.

Said Wilson, "We in east Texas did not go to Canada. And we don’t burn the flag in Dayton, Texas." People like the Ripkowskis wouldn’t stand for it.

On November 8, 2007, Congressman Ted Poe from the Second Congressional District in Texas recognized the Ripkowski brothers in Congress.

Text From The Congressional Record

Mr. POE. Mr. Speaker, today I have the distinct honor of recognizing a family in the Second Congressional District in Texas where Veterans Day is a daily family event. If you looked up the word “patriot” in the dictionary, you would most likely find a photograph of the 12 Ripkowski brothers in Dayton, Texas.

The lives of all 12 brothers form a company of heroes that served in our military in various branches spanning from World War II to the Korean War. Most of them served in a time of war, and all 12 of them returned home. They truly were a band of brothers who fought for America.

The Ripkowski family grew corn and cotton on their 200-acre farm. As World War II began, the brothers answered their country’s call of duty to serve in the military one after the other.

Today only 6 of the 12 Ripkowski brothers are still alive. Alex, the oldest of the surviving brothers, is 91. He served in the Army and was deployed in Europe during World War II. Mike joined the Air Force and served as a chief clerk for 2 years on the island of Okinawa. Herman served in the Army as an infantryman for 3 years, and he was a member of the 78th Lightning Division, which was the first division to cross the Rhine River in Germany towards the end of World War II in Europe. After crossing the river, German airplanes blew up the bridge, separating Herman and his division from the rest of the American troops. American troops quickly built a pontoon bridge in the former location of the blown-up bridge. At this point, Herman’s division met up with Russian forces outside of Berlin shortly before the Germans surrendered. It was during this battle that Herman earned the Bronze Star for laying communications wire during enemy fire.

Leon served in the Army during World War II, and his tour of duty took him to Africa, Italy, and France, where he served in the infantry. By miraculous chance, he ran into his brother Felix in Tunisia, Africa during the Battle of El Guettar. Leon received five campaign stars while in the United States Army. Franklin served as a Merchant Marine during World War II dodging German submarines in the Atlantic. He crossed the Atlantic three times during his military service. Several years later Franklin was drafted again into the Army, and he served his country one more time, but this time during the Korean War.

John “Buster” Ripkowski served as a squad leader in the infantry division in the Army during the Korean War. He helped take care of ammunition for his entire infantry platoon.

All the brothers, except one, have spent the rest of their lives after the military in Dayton, Texas. Herman was the only one to move away from his family, and he moved to Liberty, Texas, which is 6 miles away.

What makes the Ripkowski brothers’ story so remarkable is how humble and modest they are in describing their family’s enormous military contribution to our great Nation. Their humility is best understood in their own words:

Mike said, “We did it to serve our country. We’re just hard-working country folk.”

“Thank God we are here and that all of us made it home,” said Herman, when asked to describe his brothers and their service in the military.

“You had to serve your country,” said John. “I enjoyed going into the service and doing my job.”

This band of brothers believed that their service in the military was their duty as an American citizen. To them it was not for performing heroics or to gain medals but to answer the honorable call of duty for our country. “Medals didn’t interest us,” said Franklin. “Our minds were on doing our jobs and doing it better every day. Nowadays a lot of people don’t care or put much of their heart into it. But the military trained you to put your heart into it. I wish every person in America would go into the military for 1 year. It would make a better person out of all of them.”

The Ripkowski brothers’ patriotic legacy of military service is one of the best examples of our “Greatest Generation” doing their job for America during the great World War II. They are an eternal example of the service and sacrifice given to protect freedom for our Nation. They’re a good example for all of us, especially our younger generation.

And that’s just the way it is.