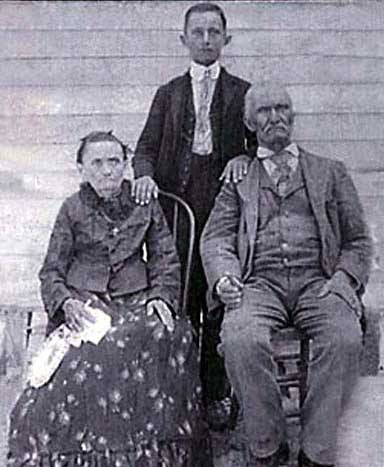 "In the year 1873 I left my native country on 16 May with my entire family from the town of Brzostek, obwod Tarnow, powiat Pilzno (Poland). My family was composed of my wife, Katherine Panciewicz, my sons Stanislaw, Wladyslaw, Mieczyslaw, Bronislaw and Czeslaw. Also with us was our maid, Katherine Gasior.

On June 16 we passed through Bremond and Houston on our way to New Waverly where my brother-in-law, Kasper Szybist, lived with his family. On my journey I lost all my belongings and two sons, Czeslaw and Bronislaw. They rest on American soil in Danville, Montgomery County. Our maid also perished there somewhere. In the same year I came with my wife and three sons to the vicinity of the city of Calvert, Texas. There our oldest son, Stanislaw, died and was buried about five miles from Owensville or six miles from Calvert. The rest of our family was weak and sick.

Finally, after I had been here one year I came with my wife and two sons, Wladyslaw and Mieczyslaw, to Bremond. Here I settled on 6 January 1875 on the land of John C. Roberts where I worked in partnership for two years.

Therefore, in the first year I came to Bremond there were no Polish families except my family and Francis Bajanski. Curious Americans came by to see the Poles.

The city of Bremond was much larger than at present after the year 1900. There were more stores and several jewish families. At this time Herman Schmiett started his grocery business with $500. Now he is a banker and has the largest business.

At last, in the same year, 1875, on the 10th of November two Polish families arrived: Pietrzykowski and his wife and three children, two daughters and one son, Ochendalski, who was the son-in-law of Pietrzykowski, with his wife and two children. They settled on Roberts’ farm. The next year Martin Matysiak arrived with his family. He was the first Pole to buy a 50-acre farm for $500. Second came Michael Paszkiet and his family and third came Floryan Bajanski, Francis Knof, Joseph Bajerowski, all with their familes

There was no Catholic Church here. Father Bussant, a French priest, came here for services four times a year which were held in the Roberts' home.

In the same year, 1876, our son Joseph was born on the 9th of January. He was the first child born to a Polish family and was baptized by Father Bussant in the Roberts' home. His godparents were Holt Ajryst (store clerk) and Mrs. Roberts.{/quotes} Later, in September, Frank Bajanski married Frances, the daughter of Pietrzykowski, in the Roberts home. After one year the wife died as well as a two-week old daughter. They are buried in the American Cemetery 2-1/2 miles from Bremond on the south side of the farm of Jozef Zabawa. Also buried there are two Catholic children of
Szepentow, sister to the wife of Francis Knof. The four graves are together. To preserve their location Chinaberry trees grow on these graves.

In the same year there appeared in Bremond Apolinary Karwowski, a nobleman, who was engaged in sales. In 1877 he lived in Marlin, Texas, where there was a Polish settlement of about 60 families. Father Fleury, a Frenchman from Waco, came there at the same time. With Mr. Karwowski, he collected several hundred dollars and bought a store which was renovated to be the Polish church. In the same year Father Joseph Mosiewicz, heart and soul a Pole, came to Marlin. He held services every second Sunday in Bremond.

The Bremond parish was small in number and poor with only about 30 families. Services were held at the homes of different parishioners. In the year 1878 Father Mosiewicz took upon himself to build a Polish church in Bremond.

The Polish people didn't have the money. We only collected $115 from the Polish families. John C. Roberts gave $250. The rest ($850) we collected from other nationalities in Robertson County. The church was build in 1879 at the cost of $1200. It was 50 feet long and 35 feet wide. Father Mosiewicz had the first service on the second day after Whitsunday.

At this time in the year 1879 the following were listed as members of the Polish Parish of Bremond.

All these listed gave small donations to build the first church. John B. Ales, a German Catholic, was the building contractor with help rendered by the above mentioned people. The parishioners and Father Mosiewicz did not enjoy happy success for long. In November of the same year (1879) there appeared Kazmierz Polujanski who was newly ordained to help and relieve. He was assigned to Father Mosiewicz. He was a Lithuanian who could not read or write (in Polish?). He had been studying in Rome. His Excellency Bishop Dubuis was petitioned (by Rome?) to bring such laggards to Galveston, Texas, and ordain them. He was not a good priest but rather a cheater.

And yet the Polish people received Father Polujanski with their whole hearts. He said his first Mass here in the Polish church in Bremond. Father Mosiewicz assisted and helped him, making several corrections during the Mass so that it could be completed.{/quotes} Several farmers got angry and right away said why should this old fool lecture that young priest educated in Rome? The first one to step out was Jacob Suchowiak, like a rebel. Second, Joseph Sadowskai and others were upset and wanted to chase Father Mosiewicz out and make Father Polujanski pastor. 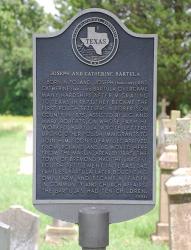 The first day of February was Sunday. Monday was the feast of the Purification. I, the author of this history, had a son to be baptized. Father Mosiewicz wanted to be godfather with Mrs. Roberts. We came to church. Father Mosiewicz wanted to offer Mass first which would be followed by High Mass said by Father Polujanski. Unfortunately, present in the church also were his two supporters, Jacob Suchowiak and Joseph Sadowski. When Father Mosiewicz got ready to say Mass, they grabbed the chalice form his hand. They would not let him continue with the services. After this, Father Mosiewicz took all the needed items and baptized my son in my home. The church was closed for two
days.

At last the Bishop was notified about it. He sent four priests to settle the problem. Before the altar in the church men and women gave testimony. At last they gave the verdict that Father Mosiewicz was and is the pastor. the argument was then taken to the American courts. During Holy Week (before Easter), with lawyers advising them, Polish witness appeared in the presence of the court where they swore before two lit candles and a cross about what had happened. The lawsuit went in favor of Father Mosiewicz.

Finally the Bishop commanded Father Polujanski to step down from Bremond. Father Mosiewicz came to offer services. Still, Suchowiak was going around to the farmers and advocating that the Poles not attend church because the old priest would be having the services.

Turmoil lasted for one year. At last the Lithuanian Polujanski, by force of power, came to our parish in the year 1881 and began his pastorate. He could not read nor write (in Polish?). He was only good in collecting dollars everwhere. Over a period of five years he collected several thousand dollars and then he left for Baltimore. There he brought a soloon from which he had a living.

At last Father Peter Litwora, born in Galicia in the diocese of Tarnow, replied in a letter that he wanted to come to the Polish parish in Bremond, Texas. The parishioners quickly donated the needed money for his fare. On the 6th day of January in the year of 1888, Father Litwora came to Bremond and became the pastor of the parish from then to this day. His brother, Felix, is the organist and helps around the church.

I am not in the position to describe the fifteen years of the pastorate of Father Litrwora because I am unable to write with my hand for a few years. Secondly, this book rested in the hands of the pastor for five years where the pastor did not write a word."

This Diary was written by Jozef Barula and translated by Katherine and Teana Sechelski. It originally appeared in the Spring 1991 issue of PGST News, published by the Polish Genealogical Society of Texas .